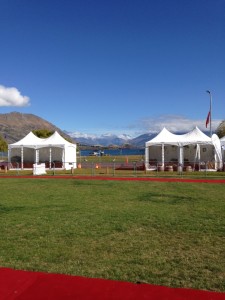 What a beautiful race location

This was my fourth appearance at Wanaka.

My first attempt was in 2011, coming off victory at IM WA and I was lucky enough to finish second behind Jamie Whyte.

I returned the following year a bit underdone, but scraped in for a fourth place finish.

I skipped 2013 and returned in 2014, but conditions weren’t favourable and I withdrew from the event after suffering from hypothermia in the swim.

This year the event was moved to a later date and it gave me some hope that the lake would be warmer and race day temperatures milder. When race day turned into the perfect day, I think everyone involved was not only happy but a little relieved also.

We had a fantastic homestay in Wanaka, as always. Scott, Phillippa and Gregor Findlay looked after us like family.

Their two previous years homestay athletes, for one reason or another, had not been able to make the finish line, so the pressure was on. It was hugely satisfying to post a respectable race day result and have them experience the atmosphere surrounding it. Patchy to say the least for this one – I was inconsistent with training, couldn’t recover as well as I normally do and two weeks out from race day, I was wondering how I was ever going to get to the finish line, let alone be respectably competitive.

A pretty solid penultimate training week gave me slightly more confidence that I may not make a complete fool of myself on race day. 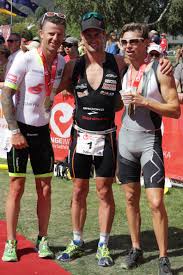 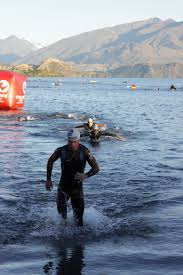 I believe this is Ready exiting the water

I didn’t warm up, and boy did I suffer as a result. The previous year I had “warmed up” pre swim start and I think it contributed to my hypothermia. Hence, even though the water was a lot warmer, I was paranoid the same thing may happen.

My muscles were swimming in a sea of lactate just seconds after the gun went off, and there was no chance of going with the faster swimmers and I had to be content with swimming at the rear of the main chase pack for the entire 3.8 kilometre journey.

This is at about the 10km mark of the cycle leg

I am usually quite good at pacing myself on the bike, but in this race, I went far too hard in the first 90 kilometres and ran out of steam with about 40 kilometres to ride.

I seemed to be making modest inroads into Dylan’s lead in the first 90 kilometres, and was clearly catching Michael and Braden. It was also evident that Matt Burton was catching up from behind, but as it turned out, wasn’t having one of his better days.

The big mover on the bike, however, was Dougal.

It was unusual in that Matt, myself, Braden, Dougal and Michael virtually converged at the special needs station at about the 90 kilometre mark of the cycle.

Matt had caught me a little earlier, and then set his sights on Braden, catching him prior to the special needs station, but this is the point also that Matt really ran out of steam.

I caught back up to Matt, as well as Braden as we passed through the special needs, and at that exact time, Dougal caught the three of us, erasing a 10-12+ minute deficit in the process. At the same time, Michael was barely 200 metres up the road.

Dougal then cycled off into the distance, Braden fell away a bit, and Matt and myself continued on to catch Michael within 3 kilometres as we cycled back into town to start the final loop.

Climbing out of town is where I realised that both Matt and Michael were struggling. Although I was feeling fatigued and wanting the sanctuary of some company, I reluctantly made the move into third position and, despite dropping minutes in the final 40 kilometres, I was able to hold onto third until T2. I started the run with a tight chest and dead legs, and things only got slightly better after “warming up” 15 minutes into the run. The run course at Wanaka is brutal at the best of times, so I knew I was in for an agonising few hours.

I was hoping I had a decent lead on the athletes behind, so I could suffer in silence and cruise to a third place finish. Unfortunately, as I was approaching the end of the first lap of two, Raija informed me that Braden was 30 seconds behind me. I’ll have to admit, that right then and there, thoughts of a third place finish were fading fast.

I struggled on to the turn around point in town and realised Braden was in fact only about 20 seconds in arrears. On the positive side, I also reasoned that he would’ve had to expend a great deal of energy to erase a 5+ minute deficit in 21 kilometres, as while I wasn’t running all that well, I wasn’t hopeless.

It was at this point that I summoned all the available grit and energy I had in reserve and put in a 5 kilometre “surge”, hoping to re-establish my lead and demoralise Braden in the process.

It worked, but I think it was more the fact that Braden ran far too hard in the first lap and was cooked anyway. There was no point giving him a sniff though.

After confirmation that Braden had fallen away, I then went into relaxation mode, hoping to cruise to an unchallenged third place finish. Unfortunately, I then got information that Carl Read was running really well and closing in fast.

I had about 3 minutes on him with 7 kilometres to run, and while I thought I had it under control, it was enough to wake me from my stupor, and made the final uncomfortable 30 minutes of the run even more so. Damn you Carl Read!

I was super happy to get that one out of the way.

Sincere thanks to the Wanaka community for their unwavering support of such a great event.

Another huge shout out to our homestay hosts, Scott, Phillippa and Gregor. Let’s Do It Again! 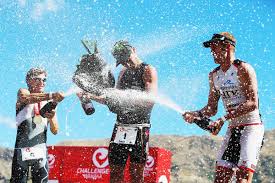 Beer? You can’t be serious