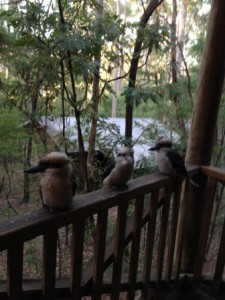 I had the pleasure of competing in the Karri Valley Triathlon for the first time last year, and was very happy to have the opportunity to compete again in 2015.

The race is based at the Karri Valley Resort, nestled in amongst pristine forest, on the banks of the small but beautiful Lake Beedilup.

The long course event consists of a two loop 1.5 kilometre swim in the lake, a 60 kilometre undulating cycle through a mix of  sheltered forest road and open rolling terrain through vineyards and market gardens, and a run held on mostly soft forest trails in the grounds of the resort.

It is truly one the most spectacular courses I have experienced.

The race starts at a little later in the morning than is typical, around 10.30am, and this is reason enough alone to consider signing up for the event in 2016.

Not long after the start I found myself swimming at the front of proceedings with Guy Crawford, Sam Lade and Matty White to the first right hand turn buoy 200 metres into the swim. From there, as it normally does after a turn is made, it stretched out a little.

Guy started to apply the pressure and took Sam along with him, with Matty hanging onto Sam’s feet. I was boxed out and swimming on my own to the right of the trio and didn’t have the firepower to swim to the front, so I dropped back onto Matty’s feet to make a line of four. Over the next 200 metres, Guy and Sam slowly pulled away from both Matty and I.

There wasn’t a great deal I could do about it at the time and I finished the first loop content to sit on Matty’s feet. When we rounded the buoy to start the second loop, I took my turn at the front and stayed there for the balance of the swim, hoping to at least limit the time deficit to the front two. I exited with Matty some 30 to 40 seconds behind Guy and Sam and was happy enough with that effort.

With all the contenders accounted for either up the road or right by my side, the only other real concern was where the other Matt – Matt Burton, was lying, as I knew he would be a hard man to stop on this course if he was anywhere near the front out of the water.

If Sean Ralph could swim a little better, I would have had him on the list of “athletes to watch” also……..hopefully in the near future with some focussed swim work. 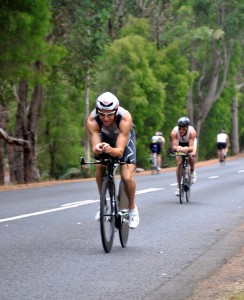 This one courtesy of Catriona.

The cycle leg starts with a 6-10 minute climb right after turning left out of the resort grounds. Matty had got away from me in the run from the swim to T1, but I had caught him, along with Guy by the top of this first climb. Sam Lade was hanging in there well at this stage, and was still out the front on his own, but the writing was on the wall.

Not long after the first turn around point, about 20 kilometres into the cycle, Matty, Guy and myself eased passed Sam and this group of four would stay together for the balance of the 60 kilometre cycle leg.

At the first turnaround point I noticed Matt was pretty close and charging hard and within 5 kilometres had caught the four of us.

As is usually the case, Matt takes it up to VO2 watts when he makes a pass, and there is no question of being able to go with him. Maybe some squats in the gym are in order.

It was then a case of damage control for the balance of the cycle leg, but with a relatively large proportion of the cycle leg left, and Matt basically going head to head with me, it was never going to end well for my group of four.

We got off the bike some 3 minutes behind Matt, and with history showing Matt can post a respectable run time over this distance, we were always going to be racing for second. 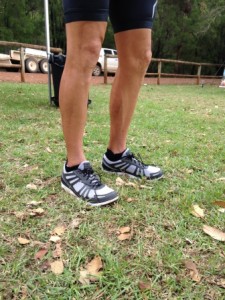 Fastest run in Rivers high performance sneakers. You don’t have to pay a fortune for shoes.

Matty, Guy, Sam and myself were into T2 together, and I left last. Not sure if I am slow at putting socks on, or the others just didn’t wear them. Anyway, I had a small deficit to my cycling companions to bridge right from the start.

Matty was moving the best in the initial stages of the run and got away early, and the honest truth is I thought we’d never see him again until the finish. Guy and Sam weren’t running quite as well, and I was able to bridge the gap within the first 1.5 kilometres, linking up right at the top of the longest climb on the run course.

Sam did the right thing and dropped off immediately, however, Guy stuck to me like chewing gum to the sole of a shoe – very annoying.

Guy and I would run together for the next 6 kilometres and in this time, we were slowly reeling in Matty.

With about 4 kilometres to run, we caught Matty, and, while I thought he may have been struggling a bit, he didn’t do the right thing and let us run off unchallenged into the distance.

So there we were, the three of us running together, waiting for a move to come and, while enjoying the competition, dreading every second of it at the same time.

Tactically, I wasn’t quite sure what I was going to do. The initial thought was to leave it until the latest possible minute in order to reduce the hurt time. However, in the back of my mind, I was thinking that a longer, rather than shorter break for the finish line would have suited me better, but I wasn’t prepared at the time for the agony of it.

It was a real battle to stay positive, because that was going to be one of the keys to win the three way tussle for second.

Matty made our decision for us when he bolted just prior to passing the aid station for the final time with 800 metres left to run. In hindsight, it wasn’t such a bad tactic at the time, and if he had the legs, it would have probably worked.

I bridged the gap to Matty, with Guy hot on my heels, just prior to cresting the penultimate hill before the run down to the final 180 degree turn adjacent to the transition area.

Guy then made his move down the hill to the 180 degree turnaround point and opened up a 15 metre gap. It was then back up the hill to the final left hand turn and onto the grass oval for the downhill finish.

In the final climb up to the left hand turn, I was able to bridge the gap to Guy and establish a 2 – 3 metre lead, which was never going to be enough after witnessing Guy’s downhill running prowess during the initial downhill surge.

As expected, Guy blew by me early in the downhill stretch to the finish line, arms and legs flailing, but strangely majestic at the same time, to cross the line comfortably in second position.

I limped in 3rd overall with Matty following close behind in 4th.

It was an incredibly painful last couple of minutes, but exciting at the same time.

Congratulations to the victor Matt Burton on a thoroughly dominating performance. Hoping to see more of the same at Challenge Batemans Bay on the 22nd of this month.

Sean Ralph – look out for this lad in the future. My charge, Philip Murphy – second in his age group. 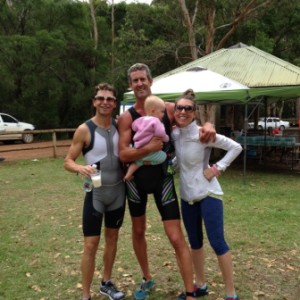