After my 4th place at Ironman New Zealand, I was expecting to kick on with a solid outing at Ironman Cairns in June. Unfortunately, I woke with a sore throat and sinus congestion the day before the race, and, despite feeling surprisingly good in the swim the following day, I felt terrible right from the moment I stepped onto the water exit ramp and started my run to T1.

I continued to push for the first 60 kilometres of the bike leg, but lost ground to the athletes in front with every pedal stroke and decided to sit up and cruise the remainder of the bike leg, giving myself the option of at least finishing the race if I felt up to it. I think physically I would have managed it, but after much mental debate, I decided it wasn’t worth the effort. Reluctantly, I pulled up stumps, caught a lift from T2 back into town, cleaned myself up and then walked out onto the run course to support Raija as she finished her race.

At least one of the team got to the finish line on the day.

I took a couple of weeks break after the disappointment of Cairns before returning to the training track, and I am glad I did – I was totally refreshed and ready to get back into it.

If my race in Cairns had been relatively successful from a KPR points perspective, I had visions of racing Ironman Frankfurt a month later in a bid to accumulate enough points to qualify for Kona. Of course, under the circumstances, a trip to Germany was no longer on the schedule.

I had planned to race Metaman Bintan in any case, and, as Kona was no longer a target, I had 10 weeks to prepare and peak solely for the Metaman event. The first two weeks were general preparation weeks, followed by 6 weeks of specific training, and then two weeks of taper.

I wasn’t 100% sure how I was going to go on race day, but I knew I had done a lot of work and was as well prepared as I have ever been. If I am dreading one session almost every day of the training week, then I have got it about right.

It was a mass beach start, with the professionals given priority at the front of the line. I envisaged the swim to go one of two ways: Courtney Atkinson and David Dellow were going to break away as a duo, with the rest of us swimming some minutes behind, or Courtney was going to be too fast for everyone and swim the 3.8 kilometres solo, exiting a couple of minutes in front of Dave, and 3 to 6 minutes in front of everyone else.

It turned out to be the latter scenario, sort of, which was perfect as far as I was concerned. Courtney went out at his usual short course warp speed and dropped the rest of us not long after we had stopped porpoising through the shallows and hit deeper water. I am unsure if Dave tried to go with Courtney from the beach, but a strangely sedate first 200 to 300 metres indicated to me that Dave hadn’t gone full gas at the start, and let Courtney swim away unchallenged.

I found myself swimming third in line on TVB’s feet for the first 600 metres, but noticed a gap opening to Dave in front and swam by TVB over the next 100 to 200 metres to fill it. TVB managed to jump on my feet as I eased past, and this was the order of things for the balance of the swim leg. I wasn’t sure how many people were in Dave’s tow at that stage, but I knew I was in a good position and feeling pretty comfortable. It seemed to me at the time that Dave was definitely cruising the swim. 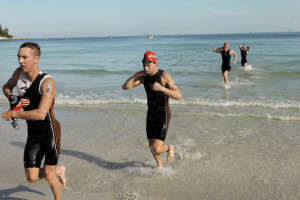 As we approached the end of the swim, it was obvious Courtney had a lead in the minutes, evidenced by the fact that the lead paddler disappeared from view early. I was more interested in learning who had joined Dave, myself and TVB exiting the water. I didn’t take the time to look over my shoulder, but heard Pete Murray announce both Caroline and Gina as the other athletes to make the cut. Pre-race, I was almost certain Matty White would have swam with this group, but he wasn’t there – the start of a pretty unfortunate day for the lad.

From a tactical perspective, it was a perfect scenario – Courtney minutes up the road, but not out of reach, and likely to ride solo for the majority of the 180 kilometre bike leg. In contrast, I had strong athletes around me during the bike leg to provide an undeniable advantage. That being said, we were pretty good at maintaining a fair draft distance for the entire bike leg.

For the first 20 kilometres of the cycle I have to admit I was being pretty lazy, and spent very little time at the front of proceedings. However, after this initial 20k, the work load was shared very evenly amongst the three of us, and, despite the hills, heat and humidity, I felt very comfortable for the first 90 kilometres. 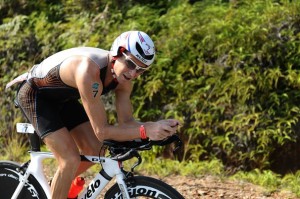 I was totally unaware of the situation at the front of the race, but it was clear that Courtney had a decent advantage as we passed him going in the other direction at the end of the first 90 kilometre loop. We were also able to determine that the next athletes on the road were a similar distance behind us, as we were behind Courtney – about 5 minutes – and one of these athletes happened to Caroline!

Three kilometres into the second 90 kilometre loop, and with a “your girlfriend is going to catch us soon” quip, I went to the front and started to push the pace, remaining on the front for the final 87 kilometres. It wasn’t really the plan at the time and I would sit up every now and again, hoping one of them would take a turn at the front, but they were both reluctant to oblige. To their credit, I did notice that the few times I took a peek behind, they were maintaining a healthy distance behind me. 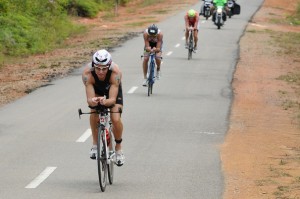 It got warmer on the second loop and that, combined with the extra outlay of effort, meant I was feeling a little fatigued towards the end of the cycle leg. That being said, I wasn’t totally destroyed, as I have been sometimes in the past, and was confident of being able to run ok. The unknown was how the other two were feeling. The fact that neither was prepared to come to the front for the best part of a whole lap meant that either they were being tactical, or were struggling a bit themselves. I was hoping it was the latter. 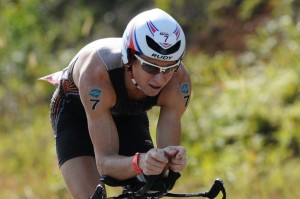 I usually get an indication of how I am going to run by how my legs feel when I first jump off the bike and run into the transition area. On this occasion, apart from having sore feet, I felt my legs were in relatively good shape. The one thing I did notice as I sat down to put on my shoes, was how hot it was out in the sun.

TVB had a slightly faster transition than me and was out onto the run course first. I sensed Dave lingering in transition for longer than normal and thought he may have been in trouble, which was confirmed not long into the run.

It didn’t take long to catch TVB, around 400 metres, and, as I went past him, there was no response. Not long after starting the Jungle track section, I saw Courtney running back the other way and he looked ok, but definitely did not have anywhere near an unassailable advantage.

When I reached the first turnaround point at the end of the jungle track, a bit over 2 kilometres into the run, and made my way back towards the resort, it was clear I had established a decent lead on TVB in a short period of time. I didn’t feel like I was running all that quickly, but a look at the result sheet post race had me at sub 4 minute kilometre pace for the first loop, which was moving along ok under the circumstances. I would get progressively slower each lap as the run progressed, but so did everyone else. 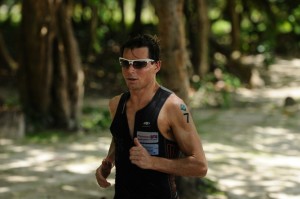 As I completed my first loop, and made my way towards the jungle track for the second time, I was keen to see where I passed Courtney going the other way relative to the first lap. To my surprise, he never ran by going back the other way and had stopped at the aid station at the end of the jungle track. Before I knew it, I was in the race lead, with TVB close to 3 minutes behind and no one else within 10 minutes. 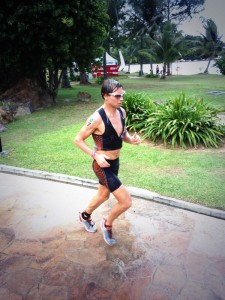 At this stage there were no thoughts of the $40000 first place reward, I dared not even think about it for one second. I had plenty to think about instead – like how hot it was when the sun came out, where was TVB, was he running faster, was I on top of my nutritional requirements, would I get cramp, would I blow up, and then there was the out and back section of the course towards the end of each lap that was a mental mind bend each time it was encountered. I had Raija out on course running around like a headless chook, but I gave no indication to her that I felt I was going to win.

I had good patches and bad, every lap. Times when I thought I was going to be able to run all day and times I thought I was going to have to walk. The only time I let myself relax and think about the win and the huge prize money I was about to earn, was at the 6.5 kilometre mark of the final lap with the out and back section completed. I still didn’t smile though until I had crossed the line. It was good to finish, not only because I was fortunate to finish first, but because the suffering, both mental and physical, was finally over.

It was great to have Raija at the finish line to share the moment. She had ridden a wave of emotion all day, the amplitude of which was probably far greater than I had to deal with.

I have been unusually sore post race, but have at least 10 days before I need to get back into formal training again. Next on the agenda is likely to be Port Macquarie 70.3, followed by Mandurah 70.3, then rounding out the year with Ironman Western Australia.

Huge thanks to Metasport for coming up with such a generous prize purse and putting together a close to faultless race experience for all. If a full or half distance race isn’t on your radar, the Blitz distance is something to consider to incorporate into a family getaway. The resort in Bintan is relatively easy to get to and is the perfect venue for a sunny family holiday. 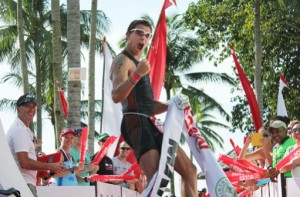 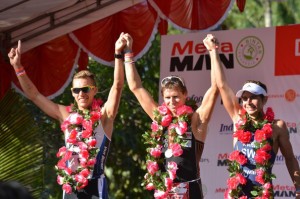